“Rising up, back on the street

Did my time, took my chances,

Went the distance, now I'm back on my feet

Just a man and his will to survive”

Survivor - “Eye of the Tiger”

As 2022 approaches in leaps and bounds, it is represented on the Chinese Horoscope by a majestic beast, the Tiger. Brave and confident, the Tiger charms all who cross his path, which is why we have selected “Eye of the tiger” as the theme for our Tet Gift Box release.

The Lacàph 2022 Tet Gift Box - “Eye of the tiger” celebrates optimistic enthusiasm, affection and encouragement as we leave behind 2021. It carries a message of resilience and determination for all who receive it and contains a selection of our finest hand-picked products from our partner farms:

Our “Eye of the tiger” gift boxes can be personalized according to your individual requirements and we are happy to advise on the choice or number of gifts in each box. We are also happy to provide each item individually if you would like to include them in your own Tet gift basket.

Further information about each product and our wholesale policy can be found on our website or in the attached file. Lacàph Tết 2022 Offering.pdf

Last word, we understand that sending Tet gifts to each other on New Year's Eve has become a Vietnamese tradition. With Lacàph Tet Gift Box 2020, Lacàph hopes this is a practical gift with many spiritual meanings. Wishing our partners and customers a very resilient, patient, persistent and skillful New Year of the Tiger. 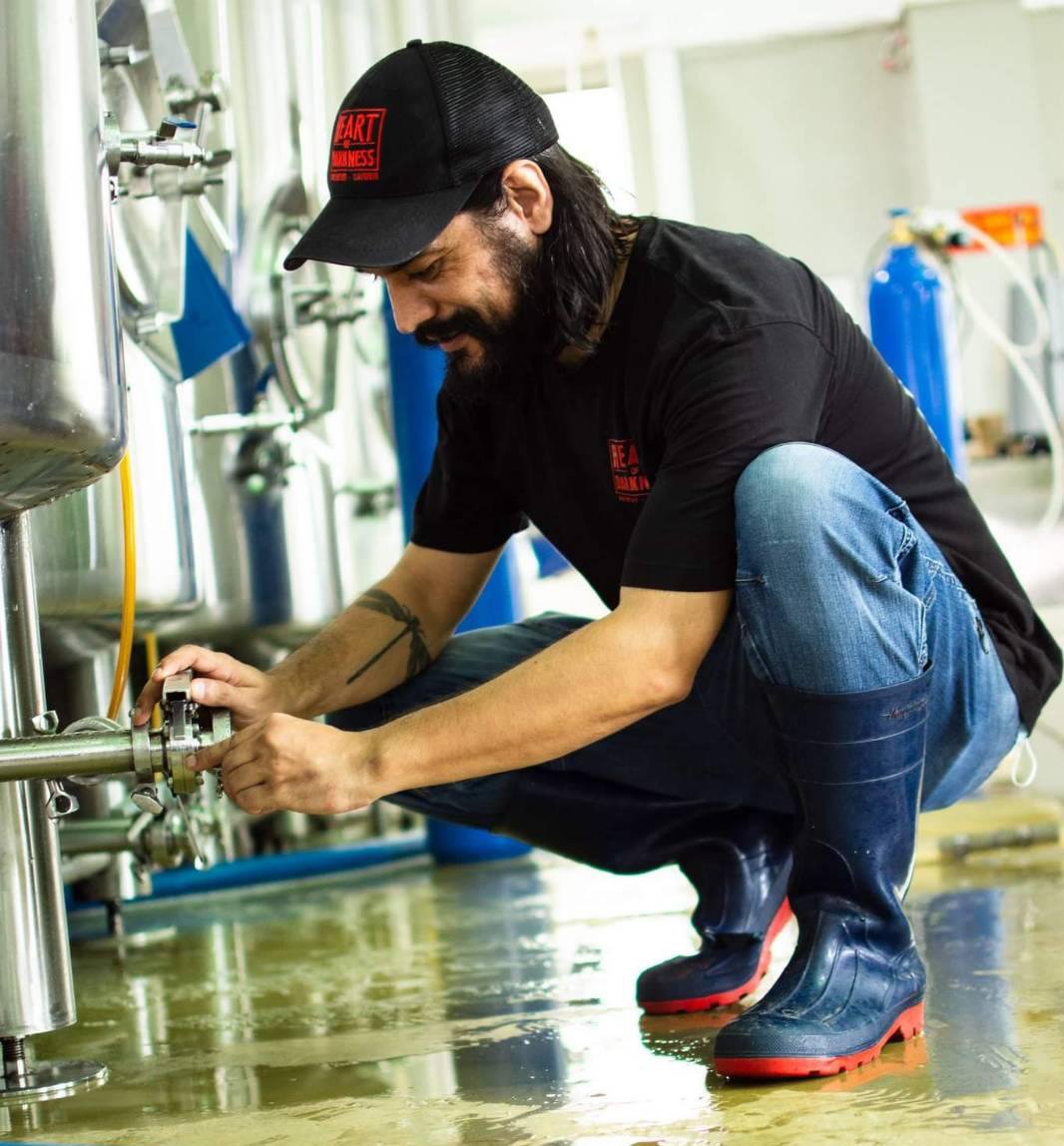 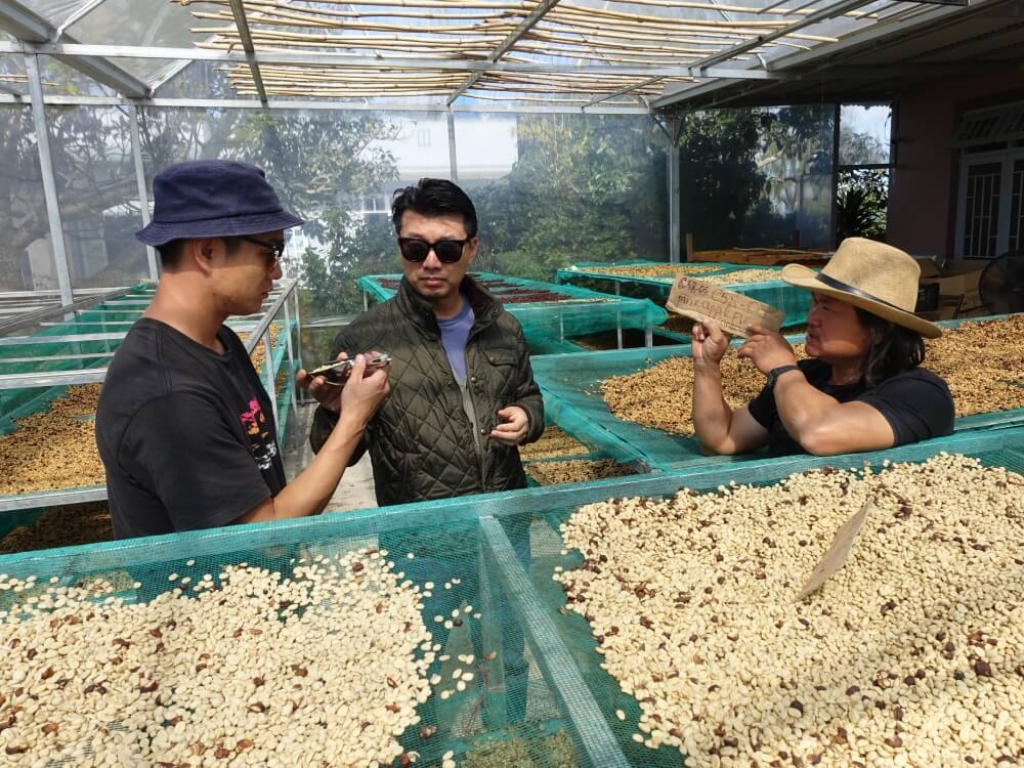 Phú made changes to the way he farms his Robusta, and now his beans are among the best in Việt Nam. We use them in our Lacàph Espresso & Phin blends. Thanks to the courage of his convictions, Phú now grows some of the best Robusta in the whole of Việt Nam. It wasn’t all smooth sailing but with hard work and commitment, he eventually achieved his dreams.

Thanks to the courage of his convictions, Phú now grows some of the best Robusta in the whole of Việt Nam

Phú’s story begins as a young child in the mid-1990s when his father decided to move the family to the Central Highlands region of Đăk Nông Province. At the time, the government’s Đổi Mới reforms were supporting coffee farmers, and encouraged by the rising price of coffee beans they left the family home in the North and moved to start a new life as part of the country’s emerging coffee industry.

Whilst growing up on his family’s coffee plantation Phú dreamed of making an impact on the lives of others and set his heart on becoming a teacher. But while his family prospered, the income from the coffee they grew was not enough to pay for his studies, so eventually, he joined his father working on the family farm. Little did he know that in the years that followed his dream would come true, but in a very different way than he imagined as a child. 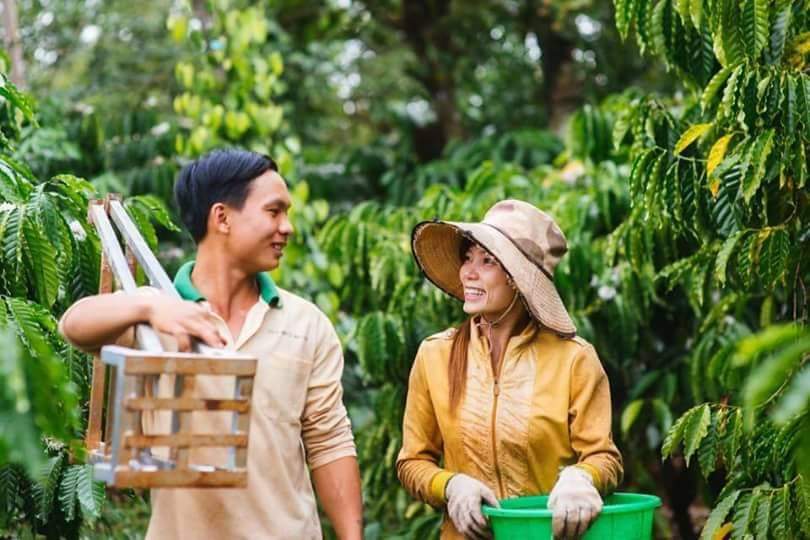 Phú was a handsome and hardworking young man, and attracted the attention of a local lady. When they married in 2010 his father gave him a coffee garden as a wedding gift. Phú knew from experience that life as a coffee farmer wasn’t easy, but he was determined to provide a secure and stable future for his young family which wasn’t dependent on the fluctuating prices of coffee beans.

There wasn’t space on his farm to plant more coffee trees, and he couldn’t afford to buy another plantation, so he began looking for ways to increase the value of the beans he was already growing.

Phú knew Việt Nam was among the world’s largest exporters of Robusta, but he also realized that these beans were considered an inferior-grade commodity product, used only for instant coffee, and tending to fetch a low price. Changing his trees to Arabica that sold for higher prices wasn't possible, so he decided his best option was to improve the quality of his Robusta.

The first change Phú made to his farm was planting shadow trees which provided shade for his coffee shrubs. The new trees also helped to stabilize water levels on the farm, and improved the quality of his farm’s soil. This was a great help as it meant he didn’t need to spend so much on fertilizers. He also decided to reduce the number of chemical fertilizers he used on his farm, and switched to eco-friendly alternatives that he was able to by cheaply and locally.

After a while, Phú noticed there were many more birds, bees and bats visiting his plantation which helped with the pollination of his coffee plants. He took advantage of this, and started to intercrop by planting durian, pomelo and cashew among his coffee shrubs. With a greater variety of crops, he was able to increase his income when coffee yields were poor or the market price was low.

At first, other local farmers were puzzled and unsupportive of the changes Phú was making. They had been farming coffee the same way for generations and didn’t see a reason to change. But when traders bought their green beans, some years the prices were high, others they were low, and the f 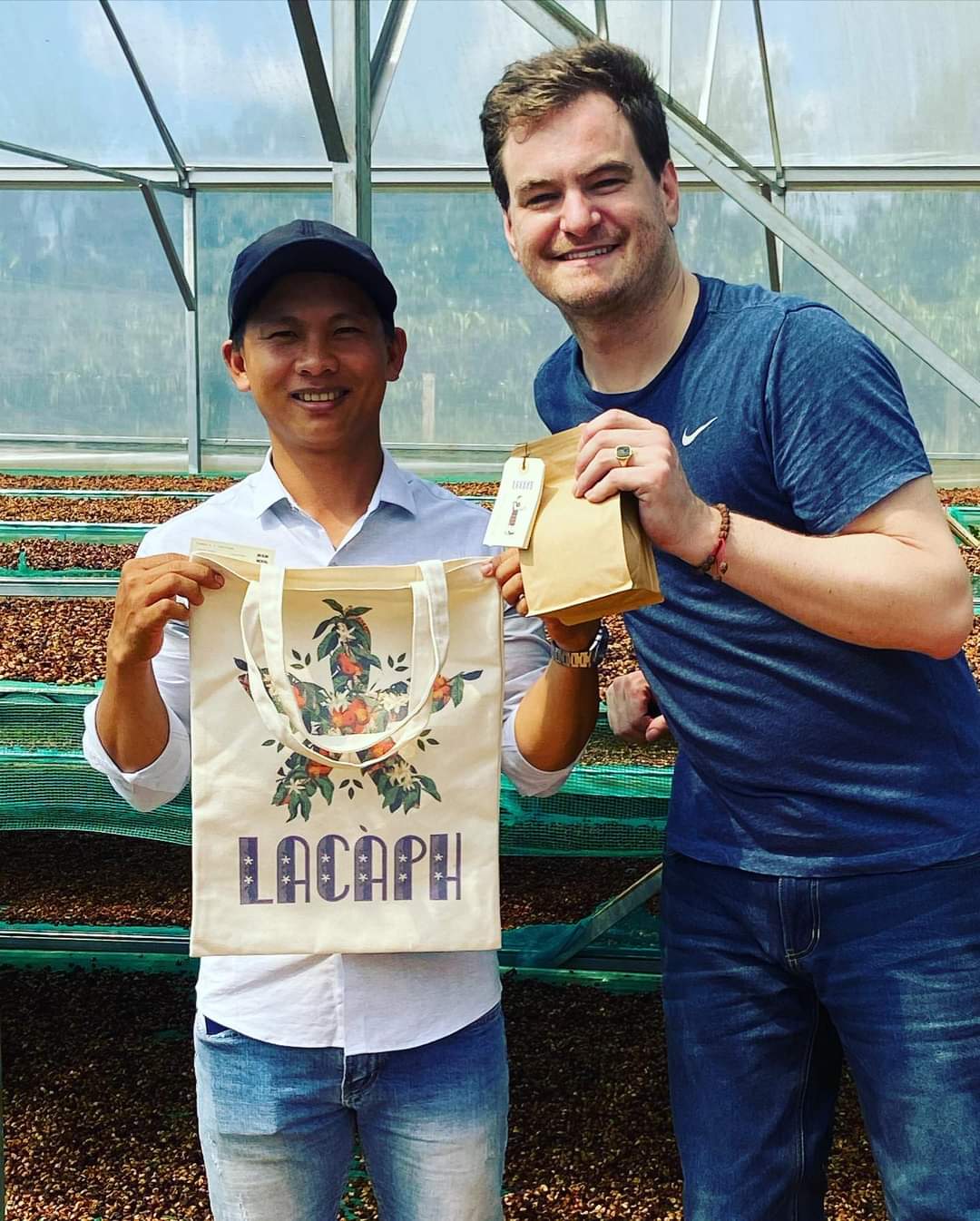 armers were never able to plan ahead or increase their production.

When Phú’s first batch of new beans sold for much more than theirs, they began to pay attention to what he was doing, and soon the quality of their beans started to increase too.

In the years since Phú was given his farm, he has worked hard to improve the quality of his coffee, researching best practices, and applying what he has learned. But more than that, he has shared his ideas with neighboring farmers, helping them to improve the quality of their beans too. As incomes have increased, this has helped develop the infrastructure of his local community and open up opportunities for many.

Not only has he achieved his childhood dream of changing the lives of others, but he has also helped change the perceptions of Vietnamese Robusta that is now valued for its distinct characteristics and rich flavors.

Ngọc’s family has been farming coffee for over 80 years. We use his Arabica Bourbon & Cascara in our Lacàph Espresso Blend and Cold Steeped Cascara. 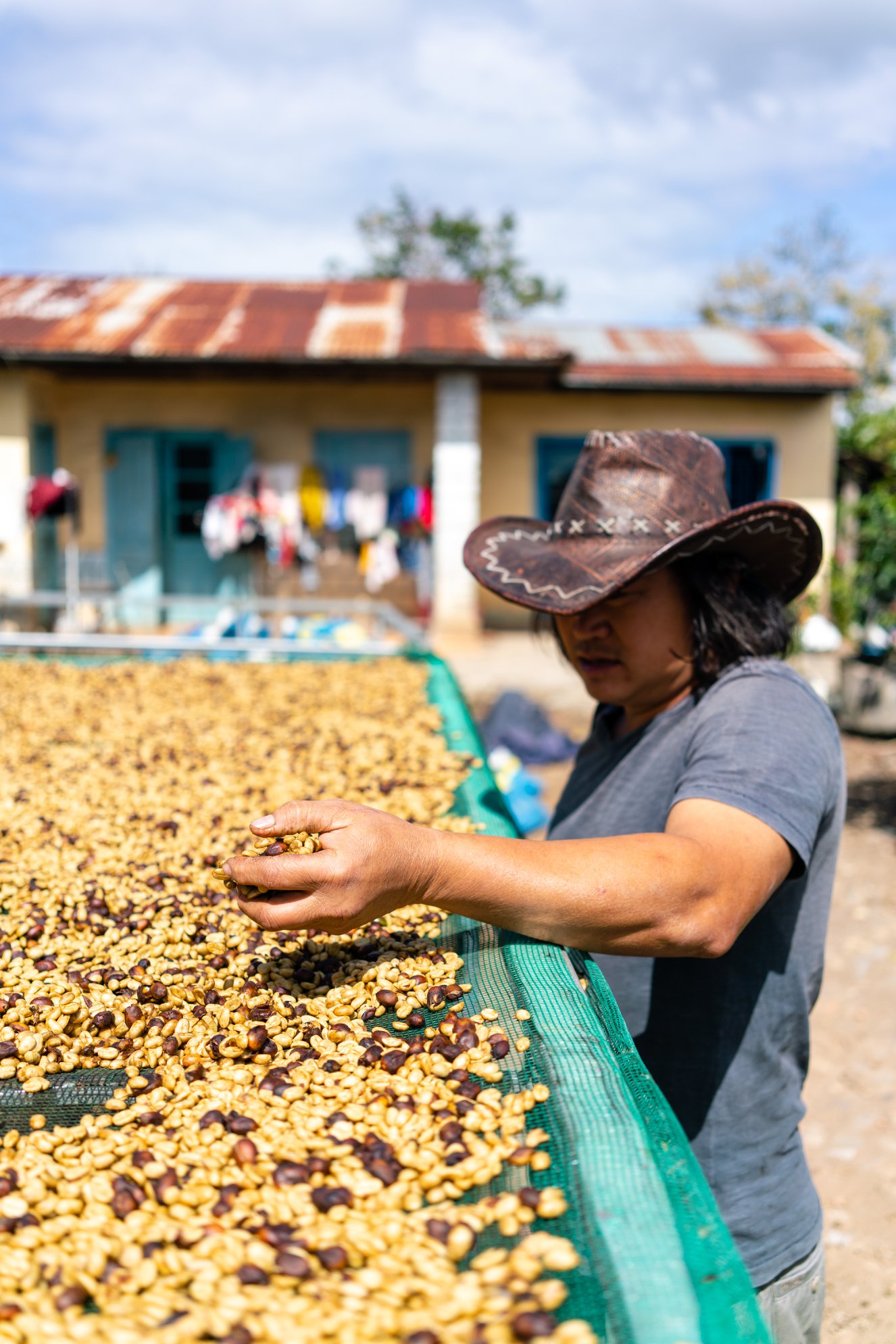 You could say that coffee runs through Ngọc’s veins, fuelling the passion that drives him to grow the best coffee he can. He was born into a coffee farming family, grew up among the coffee trees of his family’s plantation, and now grows some of the best coffee in Việt Nam with beans that rank on the Specialty Coffee Association scale.

His farm is just outside Đà Lạt City in the Central Highlands province of Lâm Đồng. The plantation was established in 1927 by a French family who were early settlers in the region, and Ngọc’s grandparents were among the first laborers to work the farm. It’s been in the family for three generations now, handed down from father to son for almost 100 years as they worked the land together. 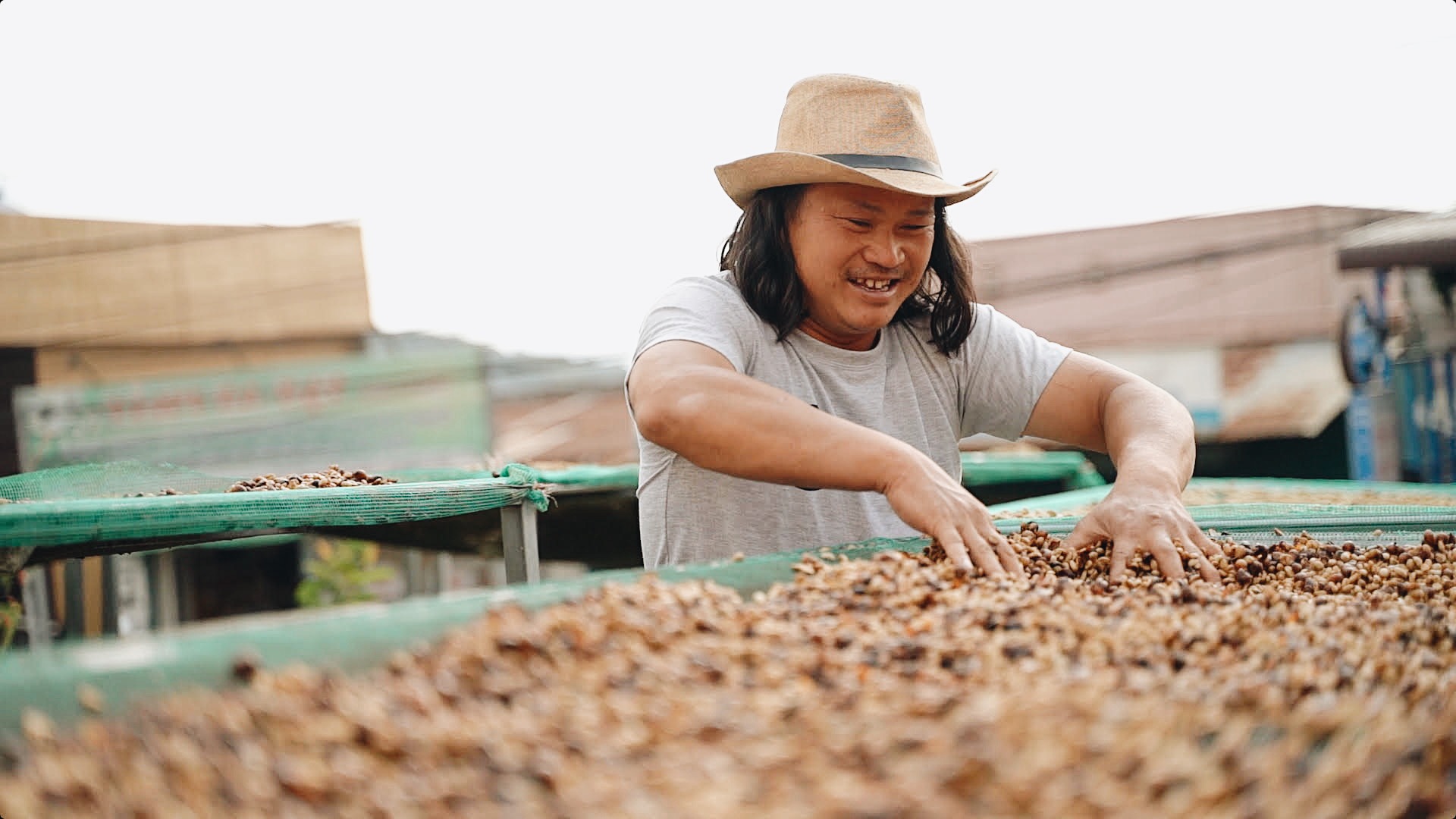 The first coffee trees on the farm were Arabica Bourbon and Typica, planted and harvested by his grandparents in the late-1920s and early-1930s using methods the French introduced. The trees flourished, his grandparents were fairly paid, and in the late-1930s they bought the plantation from the owners and started farming it for themselves.

The first coffee trees on the farm were Arabica Bourbon and Typica, planted and harvested by his grandparents in the late-1920s and early-1930s using methods the French introduced. 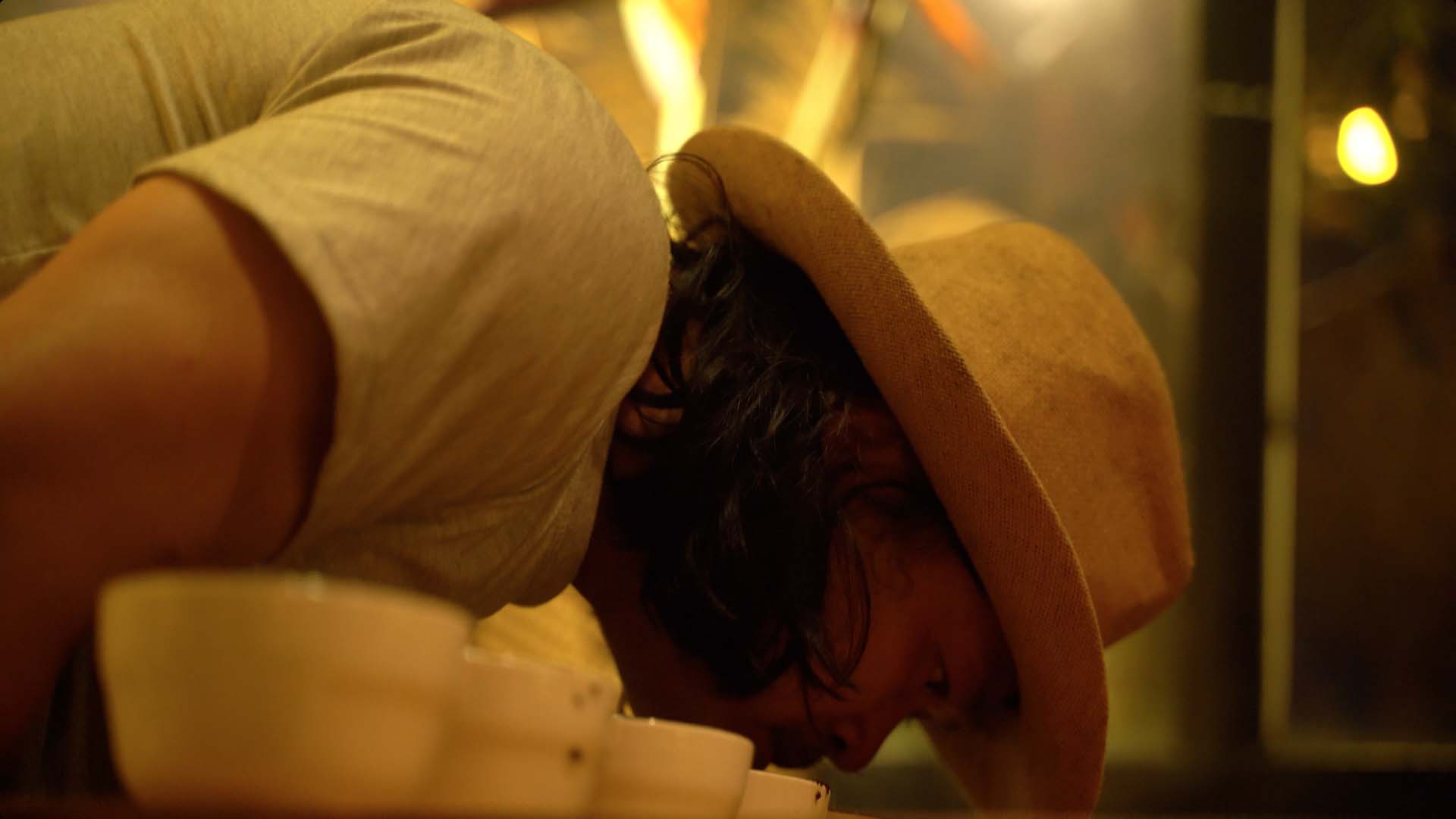 Ngọc’s farm sits around 1,500 meters above sea level and is covered in the region’s fertile volcanic soil. Known locally as bazan, the red earth is rich in minerals and provides a balance of nutrients that is perfect for growing premium grade coffee. When Ngọc inherited the farm from his father, he changed its name and established it as the specialty coffee plantation it is today.

Just as his grandparents did, he continues to grow Arabica Bourbon and Typica but in recent years has added Catimor and Catuai varieties that produce a high yield. They are also more resistant to pests and diseases such as coffee leaf rust and coffee berry disease.

As harvest time comes towards the end of the year, Ngọc’s farm turns into a hive of activity with temporary workers arriving to help harvest the ripe cherries. For many who come to collect the bright red fruit this is a highlight of the year, an opportunity to catch up with friends and earn some extra money for Tết. 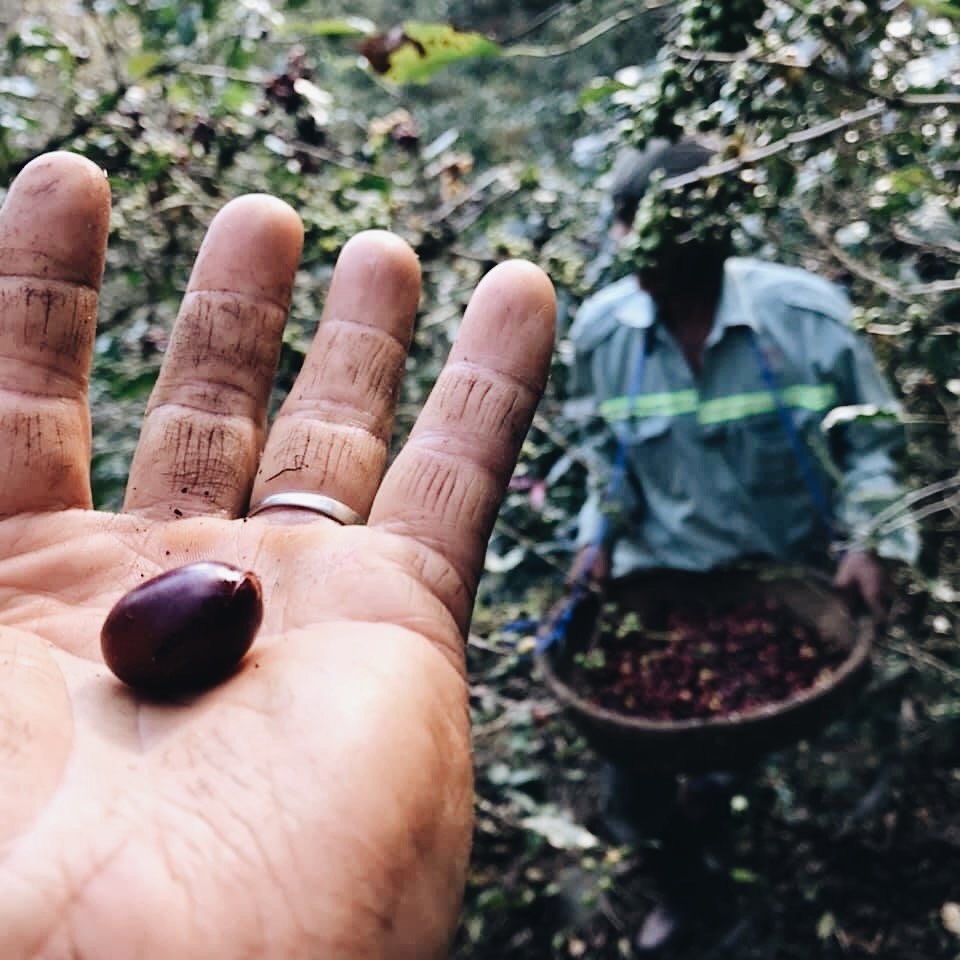 The workers hand-pick the ripe cherries, ensuring only the best quality beans are selected from each tree and leaving the rest to be harvested in the coming days. As they make their way up and down the rows of trees they chatter and laugh amongst themselves, but the work is strenuous and when it’s time for lunch they’re quick to put down their baskets and make their way down the slopes.

Once the beans have been harvested, Ngọc lays them out to process, using wet, honey or natural methods depending on the requirements of his customers. As his beans are premium quality, many of his customers choose wet processing. This method highlights the beans’ unique characteristics, spotlights their distinct flavours, and is why many specialty coffees are wet-processed.

Ngọc also produces Cascara on his farm, made from the dried pulp of coffee cherries once the beans have been removed. Drunk as a tea, Cascara is rich in antioxidants and known for its benefits to the digestive system when brewed as a tea.